Another technique I use with this knife for is splitting wood and making spindle blanks for the bow drill. I take a wooden mallet (usually a heavy piece of wood, throwing stick, or whatever I can find) to pound on top of the blade to control my splitting. The technique works very well with this blade, as long as I’m careful and stay away from large knots. 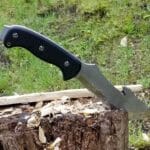 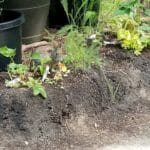 I looked skeptically into the jar I was holding. A whiff of fermentation greeted me. Small bubbles gave the surface of the sourdough starter a foamy look. I gave the soured batter another whiff. Yes, without a doubt. I had created an Accidental Sourdough Starter. This accident of good fortune would be my main food […] 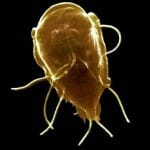 Giardia One “Gnarly Dude.” Just when you thought it was safe to drink the water, think again. Think Giardiasis. A disease of the intestine caused by drinking infected water. Also, Giardia is found in soil, infected animals, feces, even contaminated surfaces. Learn more about the misconceptions of Giardia. Giardia one “Gnarly Dude” Misconceptions about Giardia […] 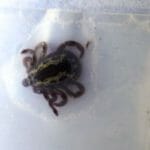 Spring on the Oregon coast is a wonderful time of year. But with the warmer weather, unfortunately, come insects that are potentially dangerous to animals and humans. The dog tick (Dermacentor variabilis) pictured here wrapped in Scotch tape. Are common ticks of the west coast from March through August. Read on for tips on ticks. […]