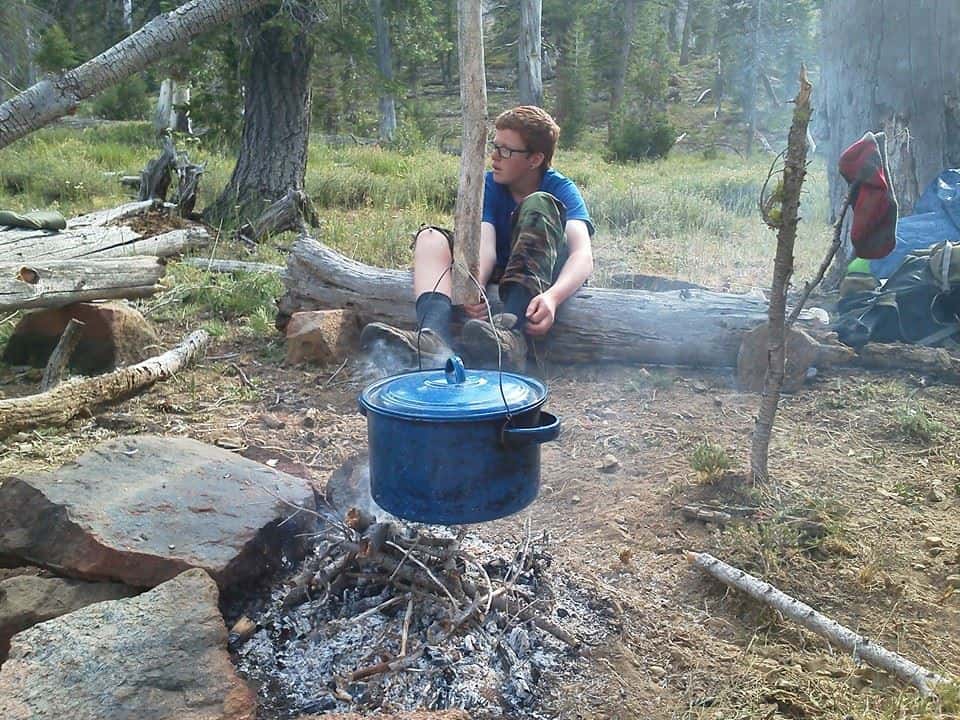 Learn how to make water safe to drink during an emergency. Water must be potable, drinkable, filtered, or boiled, to be safe to drink.  Otherwise, you could become debilitated with Giardia or other waterborne disease. Water, you need it to survive. If you are in an emergency right now. You will need safe drinking water to hydrate your body. Cooking and sterilizing food and water in a survival emergency will keep you safe. Wilderness Survival Training teaches you how.

Now you now have drinkable, potable water, which is 99.9% safe to drink. Bring the water to a rolling boil, that's it. You're done.

Pre-filter water when needed. If the water has turbidity.  Which means water is cloudy, has suspended particles, muddy, dirty, soupy, or stagnate. Or has human or animal waste in it.  You must first pre-filter. Pre-filter contaminated water by running it through some type of pre-filtering system.

Water pre-filtering can be done easily by using clothing. As an example, a cotton t-shirt works well as a pre-filter. The tight weave of the cotton catches and holds solids and grit particles on the fabric. Thereby restricting a high percentage of suspended particles from getting into the water you are going to boil.

In an emergency a cotton t-shirt, handkerchief, even socks work as a filter

Sometimes you may have to filter water that is very dirty through your makeshift pre-filter a couple of times. That's okay.

For best results, fold your handkerchief filter in half, and be sure to run the water through the filter until the water is clear. Then boil it.

After boiling, then drink the water when it has cooled. That's all there is to it.  Simple.

Pre-filtering using pants or trousers as a makeshift water filter

The US Military developed an emergency water pre-filter by hanging a pair of pants off a branch or tripod.

Tie off the bottom of one leg. Fill that leg with about four inches of crushed wood charcoal. Next, add 6 inches of river sand, then add about double that volume of coarse gravel. Repeat the process one more time for an efficient pre-filter for contaminated water made from a pant leg.

Bring pre filtered water to a boil in a metal container, let it cool down, then drink.

Pre-filtering water in this method does not take the place of boiled water treatment.

Pre-filtered water must still be brought to a rolling boil to make it potable and safe to drink.

How much potable water will you need to keep hydrated?

Lots. A minimum of two to three liters a day for adults. In extreme heat and high humidity, you will need to drink twice that volume. Keep drinking disinfected water until you are no longer thirsty, and your urine is clear and not yellow.  That is an easy, and straightforward way to keep track to know if you are hydrated enough.

Sanitize eating utensils and clothing by boiling in water

You can also boil your dinner ware. Boil knives, forks, spoons, cups, mugs, sterilizing them from 99.9% of harmful bacteria and viruses. You can even boil your clothing to help reduce the spread of disease in critical emergency events.

The Simplest and Safest Way to Treat Water During an Emergency is by boiling in a food grade metal container.

What about food? Yes, most importantly you will want to bring all your food; survival stew as an example, to a boil before eating. Soup is a great meal during an emergency. As soups are made up in large part of water, they also help with hydration and the boiling temperature kills 99.9% of viruses and bacteria.

What happens if I can't boil water to make it safe?

In the event you can't boil water then take all the safety precautions you can to reduce getting sick from contaminated water.

Always pre filter contaminated water first. Pre-filtering does not make water safe to drink, but filtering can reduce the number of organisms that can make you sick.

Allow suspended particle to settle to the bottom first before drinking

So, if you cannot treat water by boiling then, pre filter the water first into a container. Let the water sit undisturbed, allowing suspended particles in the water settle to the bottom. Best drunk if no cloudiness is visible.

After an hour or so, drink the water. Being careful not to disturb the settled particles at the bottom of the container.

If you have a sunny day and are using a glass jar to drink from. Let the glass jar sit in direct sunlight while you're waiting for the suspended particles to settle. The solar exposure will help kill some of the problem bacteria and viruses. Thus, reducing some of the risk of contamination.

To use sunlight to completely sanitize and fully treat drinking water. You must use a clear glass jar with an accumulative exposure of direct sunlight of at least 8 hours. Partly cloudy or cloudy days don't count. The contaminated water must have a full 8 hours of direct sunlight for treatment.

More information available on making water safe to drink in an emergency at the US Government EPA website.