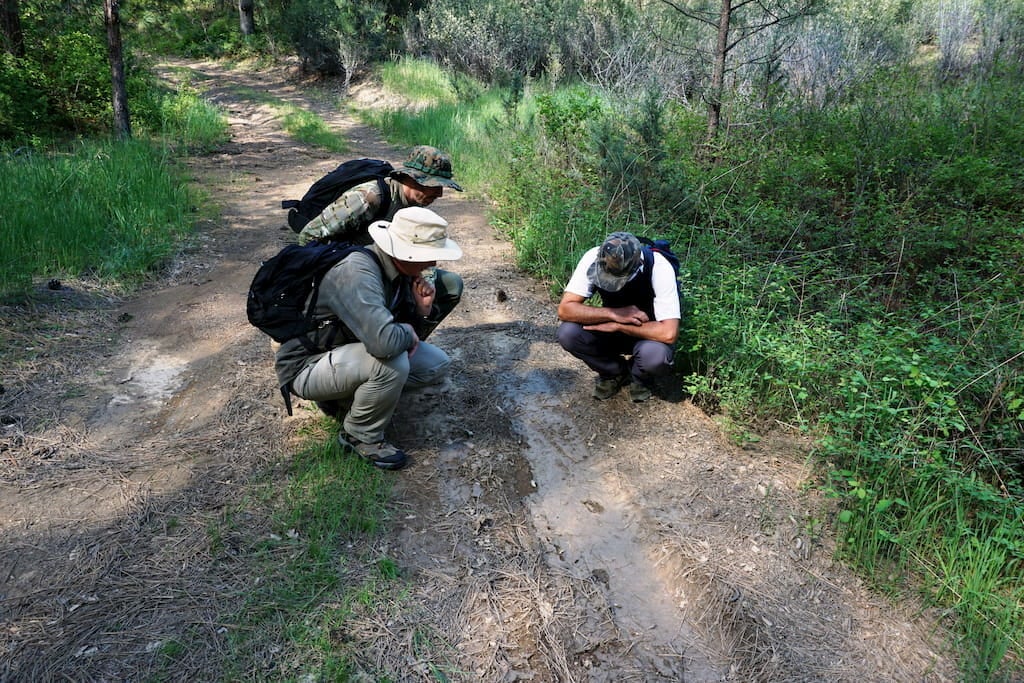 Tracking as a doorway to nature

“Tracking is a doorway to nature,” he says, studying an array of tracks that merge and overlap with the bear tracks. “It’s a doorway to this remarkable world that we live in. And in order to track you have to slow down, you have to quiet yourself and look.

The Art of Seeing

“And so that’s why we call it the art of seeing, because it’s developing the ability to notice the subtleties that are occurring around us.” Wienert is teaching Intro to "Animal Tracking", “Intro to Man Tracking,” and a course on wild coastal plants now through February in the forest and dunes of the south Oregon coast. After that, he returns to Northern California where he operates Lifesong Wilderness Adventures, which offers wilderness survival and education camps in winter and summer.

The bear tracks are a week old, but the deer tracks that lead Wienert and tracking student Alex Medeiros of Napa, Calif., to them are fresh. Tracks are affected by weather and soil. A track might look fresh after a week in firm clay, while a track in the sand can be as faint as a whisper after a minute in the wind.

But before Wienert teaches students how to determine the age and species of a particular track, he shows them how to see their surroundings in a new way.

Expert tracker sees beyond the obvious

“What I want to do is develop your eye so you can start to see things, trails, runs, tracks made from wind or things other than animals, so that you get familiar with that,” he says.

The landscape tells a story, he adds, about when the last forest fire came through, the last flood or avalanche, the high-water mark or where water might be found.

“One of the things we teach having to do with finding water is to listen to the birds early in the morning, where they congregate can be a sign, a track to let you know there could be water there,” Wienert says. “The birds will go to where there is water in the morning and again in the afternoon or evening before they head off to bed.

“It’s the same with other wildlife.”

Anyone lost in dry country would do well to know how to read the landscape — listen for the birds, note the well-trod animal paths, and search out useful plants and trees. Cottonwoods grow in a high-water table, cattails, and willows “grow with their feet in water,” and where there is a grove of aspen, there is usually water just a few feet below the surface.

“So tracking is much more than following tracks, it’s reading the landscape — even the scents in the air are tracks,” he says. “You have to take short sniffs like a dog, and it can be very subtle, but you can smell cat that way and elk, bear and people.

“Bear often smell like old French fries. Park in a McDonald’s parking lot and sniff the air and you’ll know what bear smells like.”

Before heading into the woods and onto the dunes, Wienert covers some basics about track shapes, how to measure size and stride and, most importantly, how to read sign, because that’s what trackers do when there is seemingly nothing to see.

Wienert recalls taking a class from famed New Jersey tracker Tom Brown, who pointed out a two-week old red fox trail on moss and then challenged Wienert and his fellow students to find its next step.

“We burned our eyes on that for two days and saw nothing,” Wienert says.

“And then Tom came back and casually pointed it out, and sure enough, there it was. He always made you think way beyond what was possible.”

It’s rare in tracking to get a well-defined print. Often, it’s about “sign tracking,” which means identifying those things that stand out to create a “trail,” while also recognizing basic patterns in prints after weather and time have washed away their finer features.

“A compression shape is not the perfect outline of an animal, it’s a general shape of the paw of that species,” Wienert explains. “So a cat (like a bobcat or mountain lion) registers with a circle shape, a deer with a heart shape. A cat has a heel pad and four toes and 90 percent of the time they don’t register their claw marks because they are retractable in the front. Bears aren’t like that.

“Another animal that we see often are dogs,” he adds. “They have four toes also, but they don’t have retractable claws, so 99 percent of the time you are going to see claw marks, so the compression shape for the dog is different than the cat, and some people call it a maple leaf shape.”

Look for the coyote’s claws to be much closer together and the overall print to be less splayed than a dogs.

Following sign means looking for disturbances, for things that stand out compared to the overall pattern around the disturbance. It’s a bit like playing at Sherlock Holmes, always observing, and asking, “what’s out of place here?”

Learning to track students look for broken stems and twigs, stepped-on plants, upturned pine needles, soil or sand deposited where it wouldn’t naturally occur, laid down grass, scat (wildlife droppings, which tell volumes about the type of animal being tracked), scratch and bite marks, hair, morning dew wiped clean from foliage, and even creases in leaves.

“What we are doing is looking for indicators so that they become familiar,” says Wienert, who once studied the litter of leaves in a Virginia deciduous forest for hours with a man who taught man-tracking to the FBI’s hostage team. “When someone walks on them it can create little creases. It’s fascinating.”

The only way to learn tracking is to put in what trackers call “dirt time,” studying tracks, reading the land, and paying attention.

“Our eyes want to reject the trail we are seeing at first because there is no defined pattern that we are used to seeing,” Wienert says as he and tracking student Medeiros work out big and small tracks and trails beside Eel Lake. “But the brain builds the ability to see.”

During the daylong tracking class, the men follow the signs of bear, deer, beaver, fox, raccoon, chipmunks and a rat or mouse and possibly a bobcat (based on its scat).

Learn tracking with an expert

Wienert teaches Medeiros how to decipher the age of tracks by comparing them with the crisp, sharp edges of a fresh track, how to read the age of a broken twig by its color or “shine,” how to slow down and look at a track from myriad angles — working contrast and light, and how not to jump to any conclusions about the species of the animal being tracked until all the evidence is in.

And Wienert teaches Medeiros how to backtrack himself, which Wienert says is an aspect of tracking called the “art of staying found.”

Wienert brings his survival instructor instincts into his teaching of tracking. The woods and dunes grow in depth and dimension with his keen insights and knowledge.

“Almost all of these plants and trees here have some use for us,” he says. “Some are food, some tools, some medicine, some for shelter, some for fire making.”

He points out a slow-moving roughskin newt, the burnt-orange and brown colored type found across Western Oregon.

“They are highly poisonous, and Oregon has a high rate of poisoning by newt. They secrete a toxin. And if you cut one up there is enough toxin to kill seven people. If you handle them, wash your hands after.”

By the end of the day Wienert has identified wood sorrel, a large three-leaf clover-looking plant that Medeiros says tastes like plum; a tiny carnivorous sundew that contains an antibiotic-type chemical; a calendula marigold, great for skin abrasions and light burns, including sun burns; a fluted elfin saddle mushroom, not well-known in the commercial world, but delicious in angel hair pasta or venison gravy; wild mint for the stomach, and tasty purple evergreen huckleberries for pleasure.

“Tracking is really important to survival because we are able to pick up all kinds of information about (our environment) and you can tie it in to all aspects of the outdoors, whether it’s survival, hunting or photography or just enjoying nature,” Wienert says.

“It’s such a wonderful world when you start looking for tracks, you start discovering this whole micro world, especially in the Northwest where there’s all these mosses and lichens and wonderful plants and fungi. And you get to be a kid again.

“There’s sort of a saying in the tracking community that when you touch a track, you are tracking the spirit of that animal. As soon as you connect on that line you have a connection with that animal. So, it can be exciting.”