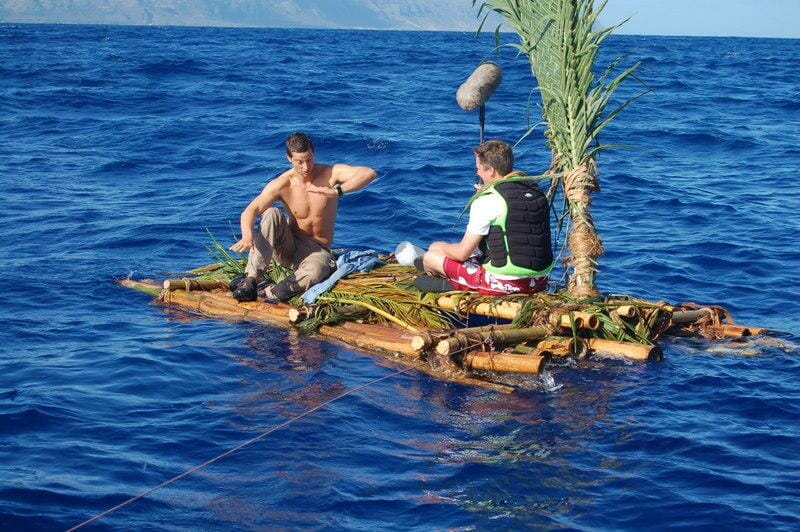 Bear Grylls Desert Island, "Hawaii Five-O" it wasn't. And commuting on the Oahu interstate made me think fondly of home. The best thing about consulting for a British TV production crew. If you're lucky to land a gig like that. The Brits love to eat great food and indulge in a proper pint of beer. Eating decent food on the run is number one with me. My chance of survival with these Britt’s is looking good.

Bear Grylls Desert Island and I'll have a pint of that!

A funny thing about being an expert... they hire you as one, and then they ignore everything you say.

Some may think that working as a survival expert for Man Vs Wild is exciting. Well, it is most of the time. For instance, pointing at people, places, and things saying such phrases as," no, no, no, that is really tacky."

Or perhaps, "what could you be thinking of?" And this one of course, "if you insist on eating that poisonous plant, I can guarantee you a slow agonizing death."

Whoa, the Director is in a class all by himself.  He will ask wonderful things from you in a polite and professional way only once.  Once is all you get.

As we were slurping our beers one night in a swinging Hawaiian hot spot, where young men come from all over the world to drink and vomit in the urinals. We met up with another film crew on their way back home.

"Mark, give the director exactly what he wants, nothing else will do."

I asked the director if he had any words of wisdom for me, he did.  He said, "Mark, give the director exactly what he wants, nothing else will do." "Cheers, and good luck," he said, and off he went leaving me curiously pondering what this could mean for me?

The Director the Raft and the Cruise

Some directors inspire you, "I need you to build me a raft, Mark Ole boy, two rafts to be exact.”  The Director cheerfully stated looking straight into my eyes.  He went on: "The rafts must be built by hand using a dull knife and your teeth if you must.  And use all-natural materials, completely rigged and outfitted for a cruise.”  “A cruise?”  I choked.

"This raft must be able to sail into the wind.  Oh, and survive a journey of at least fifty miles out to sea.  Mark, have this done in one week please. And oh, make them so we can take them apart and put them quickly together again, yes?  One more thing, make sure both rafts float!”  What could I do?

I remembered the wisdom of the other Director, nodding my head up and down quickly, and planting a big "you betcha can do" on my face. Off I went in search of a how-to book on "Building a Raft in 48 hours... that floats."

Bear Grylls and the crew are some of the finest folks I have ever had the pleasure to work with. Professional, considerate, generous, and dedicated to the work of bringing you exciting TV entertainment.

I'm proud of the raft we built. Bear Grylls was truly kind in naming the raft after my head of staff who couldn't make the Desert Island episode. The deck of the raft frame was made from bamboo I harvested from a forest on Oahu.

I seem to remember getting a boil on my elbow after returning home from this project. The Doc said it might have something to do with bacteria found on bamboo. Anyway, that's another story.

The raft design I produced is based on ancient Chinese sailing rafts. I had read an interesting article about these sailing rafts in the Bulletin of Primitive Technology. I had to try it.

The Chinese sailing rafts were designed in such a way that the hull of the raft became part of the wave. Allowing the raft logs to ride smooth and steady through the ocean waves. The cabin or super structure were built on top of the log deck.

I decided on twin hulls built of wrapped bundles of bamboo logs which would increase the buoyancy. Also much easier to handle cut, transport, bundle, for one person, than singularly with big heavy logs.

The hulls had a gap in between. This I concluded, would reduce wave friction allowing for water to pass through quickly allowing greater performance over the classic log raft design.

The raft did its job. Though after several trips out into the Ocean the hulls began to loosen from towing behind a motorboat. The bamboo I cut by hand using a folding saw and a Bolo knife. Once the raft poles were on the beach. I used an traditional technique using fire to burn the poles into the lengths I needed.

I enjoy a good challenge and this raft building business what right up my ally. Exciting stuff for a survival skills instructor and Television Consultant. Or those brave students who share my feelings for advancing one's knowledge of outdoor survival skills.

I had never been to the Hawaiian Islands before and my experience with the flora and fauna was at best limited. Lucky me. I got to make the trip to paradise a few weeks earlier before the film. No fussing about. I went right to work.

I visited museums, read books on Hawaiian ethnobotany, spoke with locals on trees and plants of historical use. Gathered up a lot of reading material.

The Shrub that Binds

I read up on the shrub Hau, a member of Hibiscus plant family, and also a Canoe Plant. And found it an especially useful plant for raft building. The bark `ili hau, has strong fibers for wrapping cordage into rope. I also discovered that is was the best wood for the Polynesian fire technique, the Fire Plow.

Hau also works great for the Bow Drill fire method of friction fire. Use the bark for the bow cord, and wood for spindle and board.

I believe, Hau is the top or near best woods for the Bow Drill. The wood is light and If one had access to larger trunks or could bundle smaller logs together.  It would make a great raft due to its lightness in weight, and buoyancy.

One early morning as I was organizing my raft material on the beach, I saw a good-sized tree trunk had washed up overnight. I had to investigate. I could tell by the ageing of the log it had been in the water for quite a while as the log was rotting.

As I looked closer, I discovered the inside of a banana tree is not made up of solid wood like a Pine tree. The whole inside of the banana trunk is fibrous. I was ecstatic. I wanted to use as much native materials as possible in wrapping the raft together.

Banana is a Grass

I discovered the Banana tree is not a tree after all. Banana is a member of the grass family, Musa paradisiaca. Now I understand why the inside of the log was rich in fibrous strands.

The banana fiber was a gold mine of coarse, long fibrous strands that could be easily twisted and wrapped into rope. Using mostly Banana fiber and some Hau we twisted the fibers into rope and tied the bamboo poles together.

It was a job working daylight to dusk. But we got it done. And the best part it was a team effort. And even better still it was fun.

THE EDGE. Where real adventure begins.